Looking for the city of the future? Swap smart for humane

Looking for the city of the future? Swap smart for humane 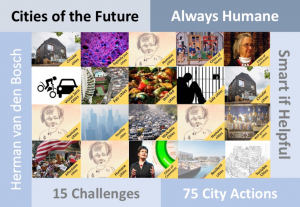 e-book “Cities of the Future: Humane as Choice; Smart When It Helps”

I recently visited New York. I love the city because its modern architecture, the museums, the lively art scene and the constant hustle and bustle. However, nobody cannot close the eyes for traffic chaos in and around the city, pollution, greenhouse gases, overdue maintenance of infrastructure, contrasts between the rich and the poor, discriminatory behavior of the police towards people of color, prohibitive housing costs that ban residents and firms to the periphery, tens of thousands of evictions every year, 80,000 homeless and yet described as one of the ‘smartest cities’ in the world.

My new e-book is a critical exploration of smart urban development. The conclusion is th

at mayors must mainly be occupied with making their city more humane and to use technology where it is useful. You can download the book (in English)[1] for free here.

The short introduction is illustrated with two sketches that my father made in 1939 of children in a slum-like neighborhood in Maastricht (the Netherlands), now gentrificated. When I was writing about the humane city, I always had in mind these and the hundreds of millions other children who still live on the brink of poverty. Only in the US – which is said to be ‘the greatest country in the world’ – we are talking about 40% of all children.

Technology is driven by the pursuit of power

Writing the book has depressed me and also made me angry at those who believe that technology can solve all problems. Instead, societal changes at all levels are necessary preconditions. Still, each chapter illustrates that well-chosen technologies might support the development of humane cities.

Ola Öderström has expressed this feeling concisely: IBM created the smart city as a fictional story that frames the problems of world cities in a way that these companies can offer to solve[2]. These companies have shared their technocentric vision of the city with politicians all over the world who were eager to profile their cities as smart.

The growing criticism on the smart city concept is mainly focused on the alleged intrinsic value of technology. History teaches otherwise. Technology may be the result of scientific discoveries, it is driven in the first place by politics, commercial interests and the pursuit of power. The impact of technology is both destructive and constructive, and its yield is unevenly distributed.

To achieve a humancentric view, Francesca Bria, former chief technology officer of Barcelona proposed to reverse the smart city paradigm: Instead of starting from technology and extracting all the data we can before thinking about how to use it, we started aligning the tech agenda with the agenda of the city[3]. She said this after the new city council radically revised this agenda.

The first step towards such a shift is to gain in-depth and widely supported insight into the challenges that a city faces. The next step is to formulate the direction of solutions that will benefit most residents: Governance precedes technology. Well-chosen technologies might be part of the solution. Moreover, the impact of technology can be increased by combining it with innovations of a non-technical nature and with other forms of social change.

How to ensure a better quality of life for all? 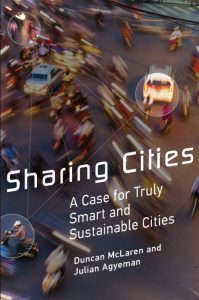 The book explores 15 problems that cities face, among others: global warming, waste, unhealthy food, decreasing liveability, unaffordable housing, the impact of traffic, lack of participation, loss of trust in the police et cetera. I have formulated 75 city actions to ensure a better quality of life for all, now and in the future, in a just and equitable manner, whilst living within the limits of supporting ecosystems[4]. I use the term city actions because all stakeholders must contribute in collaboration with the municipal government.

The development of an urban agenda is a carefully moderated and policy-supported process, involving hundreds of people and can take up to six months to a year. The outcome of this process is not predetermined and requires “updates” to be made periodically. The results are also unique for each city, precisely because they arise from the problem consciousness of the residents and the specific circumstances for each city.

Directions as source of inspiration 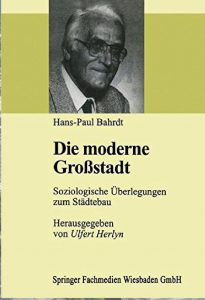 The challenges of cities that inspired the writing of this series are generic. This applies to the solutions, too. Both are the result of a well-founded assessment of what is going on in cities all over the world. That is why I speak of directions for urban actions, intended as a source of inspiration, part of the discussion or checklist afterwards.

I have compared the proposals in my book with a book written more than 50 years ago: Humaner Städtebau by Hans Paul Bahrdt[5]. It is striking that Bahrdt in many respects arrives at comparable recommendations for the design of the city. Tackling poverty, urban densification and access to nature also play an important role for him.

After writing the 16 essays, I am even more convinced that many urban problems are social problems. Cities can improve the quality of housing in a neighborhood, but without addressing poverty and the lack of prospect of their residents, it will remain “problem areas”. 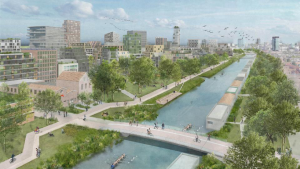 The proposed Merwede neighborhood for 12.000 people, directly near the city center of Utrecht. Example of the integration of buildings and nature and completely without cars. It is an important step toward a humane city. Rendering: Marco Broekman and OKRA. Community of Utrecht

Unequal opportunities for the inhabitants of the earth are a recurring theme in the chapters of this book. Many attempts have been made already to improve the fate of mankind. Some were successful, many failed. Social housing projects were counterproductive because social housing has increased segregation and came without (better) work, liveable income and education.

We have to address all problems at once

The only way towards a humane city is indeed the most difficult one: An approach to tackle all problems at once, considering their interrelatedness. Cities are the right place for such an approach, as the interdependence of all their problems is obvious. Still, it will take many years, provided the preconditional societal reforms occur.

This may take a second or two.